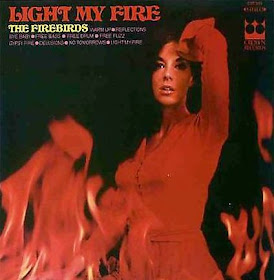 Ohhh, these records are fucked up. Okay so, for you younger readers, back in the 60’s up through the early 80’s, there was this phenomenon of the bogus record label. Companies like K-Tel and Ronco in the US and Crown in the UK would traffic in cheap imitation pop music predicated on siphoning monies from grandparents and other squares. Often times it would say the band’s name on the cover (Beatles for example), but the music inside would be performed by session hacks with horrid production values. Sometimes it would be a complete has been singer fronting these same hacks. Far more rare, and most often producing unquestionable poo, was the ‘exploitation band’ (...)

And thus, The Firebirds, a completely anonymous British session band, released ‘Light My Fire‘. Now, the Doors hit of the same name doesn’t really show up on the album, although it’s main hook is alluded to in one song and even though one song is called ‘Light My Fire’ that isn’t the one! 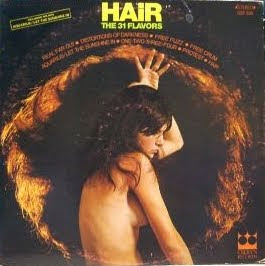 It’s incredible in just how over the top it goes: The guitar is brutal taking on an almost ‘My War‘ era Greg Ginn (Black Flag) feel on the LP’s best track ‘No Tomorrows’. It just squeals with that tortured amp buzz, like Blue Cheer’s ‘Vincebus Eruptum’, but even dirtier, if you can believe that. If you’re a Tony Iommi freak, prepare to be surprised when you hear this guy pulling out the licks to ‘Paranoid’ two years before that song existed! The drummer is particularly entertaining in his ‘Fuck - A - Muthafuckin’ Mitch Mitchell’ approach. I think there may be one steady beat throughout the entire record. This guy is a fill machine it’s absurd! Plus, the record contains a three solo suite “Free Fuzz / Free Bass / Free Drums”. The highlight here is “Free Bass”(hahaha!) . The bassist isn’t really skilled enough to do a proper solo, and hearing him struggle through it is a Spinal Tap worthy moment. Like I said earlier, the singer has a Jack Bruce-ish quality, but then does himself no favors by employing Hendrix speak on ‘Gypsy Fire’. It must be heard to be believed!

Now, remember, this isn’t a real band - just some salary guys with guitars and no control over the end product. As such, the track ‘Warm Up’ is just not the same band. It may have a few of the same players, but it doesn’t even remotely approach the sound of the rest of the album. Why on Earth would they do that?

I’m glad I asked! You see, they needed to pad the record to bring it in at just lengthy enough to rate as a long player. Why not put another track by the same group on to do this? Well, why do that when you can split up their sessions and put out another record at the same time with an entirely different name? That’s right, dummy, enter: The 31 Flavors ‘Hair’.

So Crown Records puts out this ‘Hair’ LP that contains hideous, I mean hideous versions of ‘Hair’ (duh) and ‘Age of Aquarius (Let The Sunshine In)’ (probably by completely different musicians). If my Grammy bought this for my birthday, after being molested aurally by ‘Aquarius’, this would been art on my steam heater, man. Which would be a shame because following those sonic abortions is more Firebirds material. A few tracks (’Protest’ & ‘1,2,3,4') sound like they are from the year before heavy distortion arrived and rumble along in a garage punk manner - casually out of tune and sludged up. ‘Free Fuzz’ & ‘Free Drums’ reappear here. Wrapping things up is ‘Distortions of Darkness’, which is an instrumental version of ‘Light My Fire’s ‘Reflections II’ (and I imagine was probably called ‘Reflections I’ at some point) - only here it’s about twelve times as heavy and barbituated.